So my colleague Kathleen and her inexhaustable supply of undergrads at Simon Fraser University in B.C., Canada, have generated seven potential DMAP1 lesions, using the male recombination screen described in the last post. Recall that in this screen, a P transposable element very close to the upstream gene CG33785 was induced to transpose in the male germline, hopefully generating a deletion in the direction of DMAP1, and thereby recombining a recessive brown eye colour mutation onto the same chromosome. Note here that four out of seven potential lesions produce viable brown-eyed (and therefore homozygous) flies. They look normal but are they really? In Figure 1, each potential mutant that produces homozygous progeny is tested for fertility. For each strain, four crosses, with virgin male and female parents, 3-4 of each sex (i.e, as close to identical conditions as possible). First, balanced males and females are crossed to each other (grey and black representing Cy males and females respectively – remember Cy is the dominant curly wing mutation that marks the SM6 balancer). Then, balanced males are crossed to homozygous females (which are dark blue in my colour scheme) – this tests the homozygous female fertility. Then the other way around: homozygous males (light blue) crossed to balanced females – this tests the homozygous males’ fertility. Finally, homozygous males and females to each other. 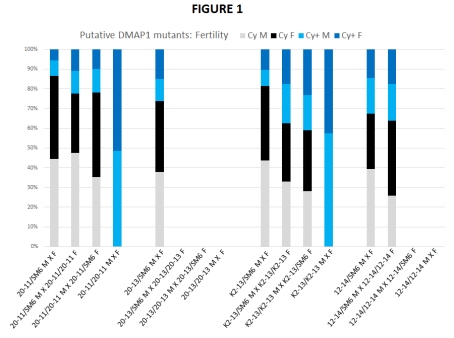 The total number of flies for each cross exceeded 100, but I expressed the proportions of each genotype as a percentage of 100 in this graph. For balanced parents crossed to each other, the ratio of balanced to non balanced progeny (or blue shades to grey shades) should be 0.5.  (Think A/a X A/a, where A is Cy, and Cy/Cy is lethal. Half as many a/a to A/a, or 1/3 : 2/3). Note that doesn’t really happen except for 12-14 (and that ratio turns out to be 0.48).  For the two middle crosses, heterozygous males to homozygous females and the other way around (think A/a X a/a) half the progeny should be homozygous, and half should be balanced, or 1:1.  So you should see as much grey/black and light/dark blue for those crosses. Do you? Of course, homozygotes crossed to each other are depicted solely in the blue shades.

Clearly two of the potential mutants show sterility defects: 20-13 is male AND female sterile (no progeny at all for the second, third and fourth crosses), and 12-14 looks male sterile. Incidentally, in the very first post about this project, I yanked the ovaries out of 20-13/20-13 females, (look here), and asserted the testes didn’t look quite right either, so that’s consistent so far. (Could still be something in the background, but relish it for now!)

In summary, 20-13 is homozygous male and female sterile, 12-14 is male sterile, 20-11 and K2-13 homozygotes may be semi fertile and perhaps even semi viable (particularly 20-11). But are these all mutations in the same gene? Stay tuned.